One of my pieces of writing I am most proud of is, strangely, a poem. I haven’t written any poetry in a long while and even when I wrote poems on a daily basis, the process didn’t feel as natural as when I write fiction. I struggled. I imagine every poet struggles to an extent to birth the truly touching, real, amazing poems. Only, my poems never reached that level. Except maybe for this one poem which was nominated for the Pushcart Prize and one reader wrote to say he teared up reading it. That, in turn, brought tears to my eyes. No one had ever responded so emotionally to anything I’d written before then. 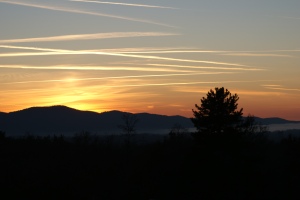 Since the journal no longer exists in the same form and the website has been taken down, I’m re-posting the poem here to remind myself that the struggle is worth it. I learn through failures. Although, I should be the world’s most knowledgeable person by now considering the number of failures … Oh, well.

Staring at the darkened sky

I can almost keep up the pretense

of being home, but the stray dogs

and the men’s snores keep me awake

in my rocky grave, thinking

of the many times I kissed women

I shouldn’t have but never feeling

as unfaithful to you as when I hug

my heavy gun close to my chest.

The shadow of death trails behind us

even on overcast days, it dims

the image of home until I can barely

recall the memory of you. I’m not alone,

just lonely as a sky without birds.

night after night, the thunder

of oil and tire I dream – sometimes awake –

Staring at the clouds, I begin to see

camels and minarets, rarely any

familiar shapes. There may be something

to Rorschach, after all. It feels like I inhabit

powers a force that isn’t entirely me.

to sting on the parched skin,

the shamal whips up the sand

lashing us with vicious shower until

my mouth becomes a desert too.

They say this is for real, the generals,

and that we are going to win,

but when I feel that rush I never

where the enemy is just a machine,

a faceless algorithm that can only

lose or win. Out here, it feels

A slice of sky. #trieste #bellaitalia🇮🇹
Spring inside and out. And a comfort for the soul on this tense election day. I keep checking the news, hoping for a change for the better. #electionday #hopeforthefuture #springblooms
Rainbow at the end of a great day.
I'm chuffed to be included in this year's Two Thirds North. Look at that cover! 😍
Tmin. ❤️
Reward after an exhausting week. #fridaymood #delish #lipica #foodie
Loading Comments...
%d bloggers like this: