It’s always so much fun to pick other authors’ brains, especially those whose work I admire. S. D. Wasley is one such author. I’ve read and enjoyed several of her books, most recently Strange Truths, the first novel in the Alice England Mysteries. 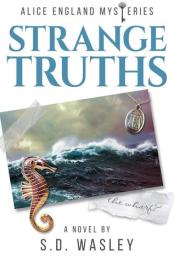 Strange Truths was as unique as Alice England. It was a delight to read, with all the quirky characters, the superb writing, complex relationships and intriguing plot. Bitter and sweet moments intertwine throughout the story, making it at times poignant, at times romantic and heart-warming. I recommend it if you’re looking for a good mystery.

Sometimes I have an idea and get swept away with it, writing furiously until the end. This was one such book! I thought of the idea while I was sitting waiting for my daughter outside her school and started writing a couple of weeks later. I was supposed to be writing another book at the time, but this one took over. I think the main difference was that I unlocked myself from generic constraints while I wrote it. I didn’t think of it as a paranormal or a romance or whatever. I just wrote the story. I suppose that’s why it ended up as a crossover.

I find I have to write detailed plots for sequels before I start writing, but for first books or standalones, I tend to start with simply a premise. What I mean is, I have the rough plot in my head, but if a plot or narrative were an alphabet, I’m only usually starting with A, G, P and Z. All the other letters come later, while I write. Sometimes I feel really lost when I get to the middle section of a book, and have to pull out a notebook and do some plot scribbling. But if I put my worries aside and trust the process, the narrative usually seems to come together organically. My best ideas occur while I’m actually writing! I haven’t noticed much difference between the genres – my plotting seems to operate the same no matter what I’m writing.

I have been especially prolific over the last two years because I wanted to fast-track toward becoming a full time author.  I’ve tried a few different types of publishing and written in a few different genres – I’ve written some stuff I’m proud of, and some stuff that simply didn’t work. It was a challenging but valuable time for me because I think I improved a lot as a writer over the past two years. I write fast because I get caught up in the story and think about very little else until I get the words down. To write one book (first drafting) generally takes me two to four months, but the editing process happens over a few more months because I need to take breaks in between edits – otherwise my editing is not as good.

Indie publishing is great in that it’s nice and quick to market! They tend to be more agile and can get a book published much quicker than a traditional publishing house. They also cover your editing, cover and other outlays. However, you’re pretty much doing most of your own marketing, promotion, sales strategy, advertising, etc. (which isn’t something I enjoy). It’s unlikely that your book will hit the bigtime with a small publisher.

Self publishing gives you total control but it can get expensive, hiring a cover designer, editor and sometimes a formatter. Again, you have the problem of doing all the promoting and marketing yourself. One benefit is that you have control over pricing, so you can use a pricing strategy (e.g. first book in the series free or 99c). Again, it’s not likely you’ll hit the bigtime.

For me, I like working with a traditional publisher best (at least for now!). The experience has been wonderful. The Penguin people know so much, do lots for me and my writing, care passionately about my book, and the editorial support has been top-notch.  And there is nothing like seeing your book on a local bookstore shelf!

Not at this stage! My next book out is a rural romance, but obviously that subgenre still sits within the romance genre. I like genre-busting and crossover, so anything could happen!

Write lots and often. I improved so much in the past two years, just through the sheer amount of words I wrote.

I just finished the first draft of my second book in the Daughters of the Outback series for Penguin. Next I will probably complete my YA series, The Seventh, and then see if I can whip the final standalone NA paranormal into shape for The Incorruptibles. Alice England has another mystery waiting for her, of course, and there will be more romantic action in rural Mount Clair before the year is out. I have no shortage of books on my to-write list!

Thank you so much for inviting me to be on your blog, Brigita!

Find more of her books on Amazon or pre-order  her rural romance at Penguin Random House.