I’m very lucky to have brilliantly creative friends. One of them has transformed The Pirate Tree into a kamishibai form, which is a form of Japanese street theater that became popular during the 1930s Depression and the post-war period. It’s becoming increasingly popular again and it’s no wonder because it joins the best aspects of theater, storytelling, and illustration.

Vesna premiered The Pirate Tree in July in the magical atmosphere of the medieval village of Stanjel. 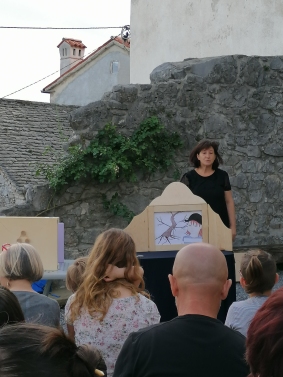 Here’s also a video of me reading The Pirate Tree as part of my publisher’s online book club.

When life gives you lemons, make Mary Berry's lemon syllabub. #nomnom #homechef #lemondessert #lemonsyllabub #maryberry
Majestic. #oaktree
Oh, what a good read this was! I loved every single character in the book. They practically jumped off the page. Lottie was so flawed and yet a character I couldn't but love. The pacing was superb and kept me riveted till the end. The story was in turns sad, happy and even funny and it didn't shy away from tackling some serious issues. I've loved everything by @sashawasley_author so far but this one is her best yet.
My favourite constellation. #ilovecoffee☕️
Mala dežela Gaël Faye
Loading Comments...
Comment
×
%d bloggers like this: